Currently it is probably hard to miss that there is an unusual thing going on in space. The ex-Microsoft executive Charles Simonyi (who is responsible for Word and Excel, I believe) bought himself a ticket to the International Space Station ISS on a Soyuz spacecraft and now enjoys a few days of weightlessness and great views of planet earth.

His website Charles in Space is a good source of information on what’s going on. One of the things happening there, which we might not have heard otherwise, is that one of the crew, Suni Williams, was running the Boston Marathon. OK, the logistics of that was a bit difficult – she could not just zip down to Boston, run the Marathon and be back in time for the next shift, so she ran on the treadmill up in space during the same time the Marathon was done on terra firma. She finished in four hours and twenty-four minutes.

But the most fascinating, and the reason this is reported here on this blog, is the fact that she was wearing a JustZen t-shirt during her accomplishment – believe it or not (the choice is all yours) – but here is the proof. In the background you can see the tunnel to the next compartment of the ISS and the harness Suni is wearing connects her to the floor with some bungee cords to simulate gravity. 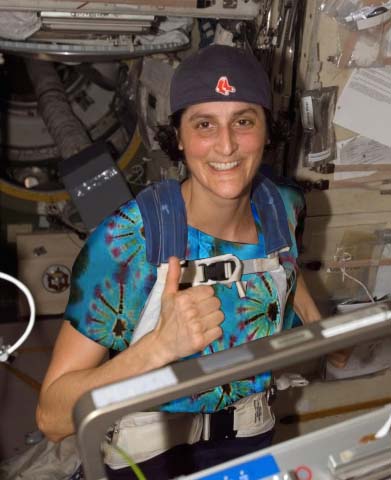 Way to go, Suni, congratulations for your cool accomplishment and give us a buzz, we will be soooo glad to supply you with another few t-shirts, jackets, or henleys.

This site uses Akismet to reduce spam. Learn how your comment data is processed.