I can imagine that many artists like nothing better than creating their art without being bothered to do anything else. The ideas situation is that connoisseurs of their art come to them with a pocket full of money and leave most of that with the artist when they leave.

Unfortunately this ideal situation is often no met in the so-called real world. Artists often have to find those who appreciate what they create, and some have decided to become nomads to accomplish to do just that.

At JustZen we have taken a two-pronged approach to show you what we have to offer: There is, one, the JustZen website with the potential reach of the whole world, but also, two, to reach out and physically go out and meet people. Yours truly has mostly taken job number one, and Gigi has become the nomad to travel.

Once in a while this author is allowed to leave the keyboard and go out and see the world as well. This was the case when Mammoth Lake had its Festival of the Arts this just past labor day. It was decided that this long trip and the hotel was not to be wasted for only one person and one purpose, but that webmaster and junior staff would go as well and that the trip would be expanded a bit to see the sights.

The setting of the festival was in a beautiful wooded park and nomadic artists from all over the area congregated. These nomads are a not so very big group of special people and after a few years of traveling to diverse art festivals and shows, the faces you see become familiar, and friendships develop.

Setting up starts the big buzz, people are busy preparing for the show and putting their best foot forward – then the day or days of the actual fair with lots of talking, demonstrating and selling.

Once the last visitor to the show has left, the festival is over and a very unusual mix of feelings and emotions spreads throughout the grounds of the show. You can feel excitement of some who had a very good show, some with not so good mood who wished they had done better but overall there is a feeling of comradery and togetherness. Yet there is also a bit of a feeling of emptiness and loss, as it’s all done now and this shared experience is over.

Cars a brought in, replacing the crowd of visitors and all the pieces of art that did not find a new owner are packed up. 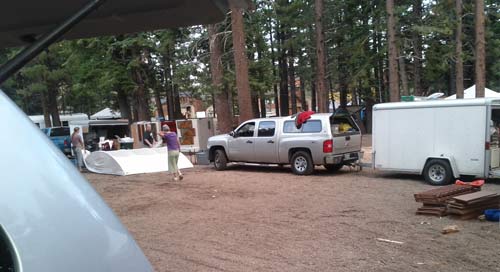 Some of the artists are amazingly fast with their break-down and so the festival site clears out more and more. Some, with more elaborate displays, need a lot more time to pack up, disassembling displays and folding down canopies. 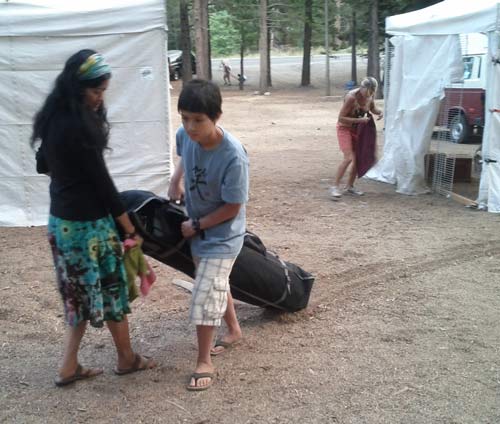 Gigi with all her many items from mudmee hoodies to hairbands is often one of the late completions but this time junior staff was there to help and here we see that the canopy is already packed up – one of the last items to get into the nomad’s wagon – while other artists are still packing. 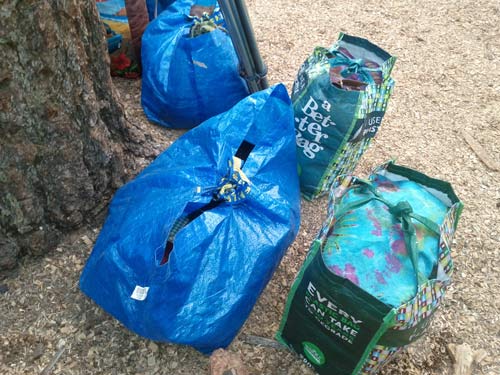 Packing has become an art in itself, a honed skill over many festivals, to efficiently and effectively stow everything in a vehicle as small as possible. Here are the last items to fit into the last crevices of the wagon.

The next day was ‘reward’ day. Yosemite is less than an hour drive away from Mammoth Lakes and it was the destination. First was a stop at Mono Lake and then it was into the park – and a beautiful park it is.

But in the next picture you can see that Gigi just has to have a task – here she made sure that these two rocks remained separated. The author was not quite sure why that was important, but it was something that Gigi thought was necessary. Also notice that Gigi does not wear Mudmee Tie-dye all the time. 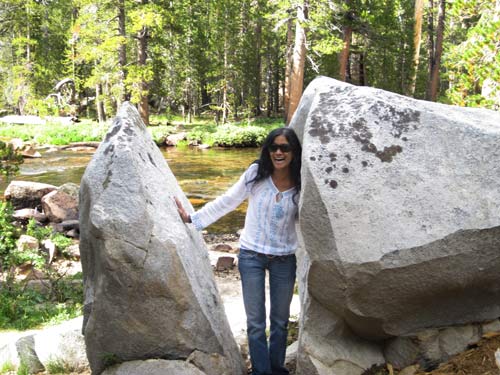 Before you may go back to your scheduled activities, one more visual impression from one of the most amazing lakes at Yosemite at over nine thousand feet elevation showing yours truly and the junior staff. 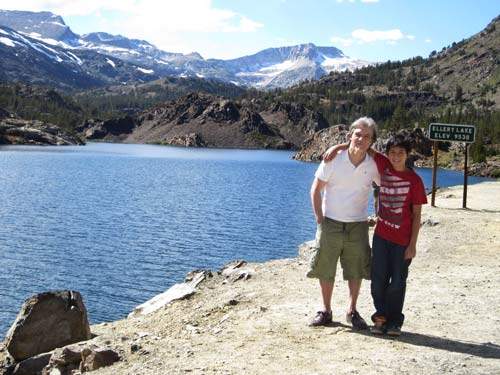 Since getting back from that trip we have been busy again and added plenty of new buddha bags to the web site – over 70 to be exact – so, if you have been waiting for the right one to come up on site – it’s time to take a look.

Gigi went onto her biggest trip ever and is – a the time of this writing – September 24 – in Idaho. Last week in Boise and this week at the Thousand Springs Festival of the Arts in Wendell. Her booth number is 18 – in case you are in that neck of the woods.

This site uses Akismet to reduce spam. Learn how your comment data is processed.