Yours truly did not always appreciate the type of clothing that now makes up a bigger part of his life. Quite the opposite, I have to admit. In fact, clothing was hardly on my mind and did not warrant any consideration. ‘Dressed for the occasion’ was not something I had in my vocabulary.

Let me tell you a little story of my first encounter with the idea of dressing appropriately. It has not directly to do with sushi but let me get back to that later – first a bit of background.

Those were the seventies and I was just at the age where you question everybody and everything. One of the things that was questioned was the necessity of a haircut, in other words, I had long, very long hair, and the other one was the type of clothing that my parents would have approved of, in other words, I wore the non-conformist uniform, blue jeans and a t-shirt. OK, OK, so I probably was a hippie.

It was the last year of high school, in Germany that would be grade 13, and we went on a field trip to the (then divided) Berlin. It sure was an interesting experience. First crossing the border into East Germany. East German border patrol entering the train and asking everybody “Papers pleease,” intimidating all of us despite our intention not to be intimidated by this type of GeStaPo. Then a few hours of travel through ‘enemy’ territory and finally another border crossing into the island of capitalism within the eastern block – West Berlin! A city that had money pumped in by the west to create a real eye sore within it’s surrounding communist empire. We loved it!

After settling in at the youth hostel on ‘Kurt Schuhmacher Square’ we started to explore the city. A whole week to see museums, visit East Berlin on a one day visa (Berliners called the fee for the visa ‘admission’) and experiencing everything this city had to offer.

And now I finally come to the point of this story. One of these experiences was a visit at a Japanese restaurant. Japanese presence in Germany was very thin at that time. To my knowledge there were only two Japanese restaurants in all of Germany, one in Düsseldorf, and the other one in Berlin. A few of us decided to spend a bigger part of our allowance on a Japanese meal.

We were in for a treat. With the presence of Japanese culture so rare, the few places that represented Japan in Germany were very authentic. Entering this restaurant at the Europa Center in the very center of West Berlin was like entering a different world. Fortunately the personnel did speak German but beside that we were in Japan. The waitresses even wore traditional kimonos.

Right there my lesson started. Entering this new world in our non-conformist uniforms of jeans and t-shirts made me feel uncomfortable. At that time I was able to suppress that feeling but just the fact that I still remember this after many decades shows you the intensity of the lesson and how much effort it took to suppress the discomfort of not fitting in.

I have to say that the staff of this restaurant was very accommodating. No remark, not even a disapproving glance at this bunch of misfits. We were treated with the utmost hospitality and this was the place where I was taught how to handle chop sticks properly for the rest of my life.

The lesson that I learned was to honor a host by adhering to his culture as much as possible. Just to forget for a moment my own point of view, however rebellious and righteous it might be. All will feel more comfortable. That does not need to mean that I have to forget the reason for my rebellion, but from this level of comfort the assessment who the target of the rebellion should be can be done with a much clearer view.

After this I certainly still wore my non-conformist uniform most of the time, but I was able to don shirt and tie when it was appropriate. 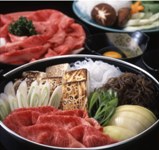 I wish I could say that we had sushi that night at the Japanese restaurant because then the title of this post would match the content – but I can’t. We had sukiyaki, which impressed us all so much that we had a cook-out at one of our friends’ house a few weeks later to try it ourselves. But I claim my writers latitude of twisting things around a bit to make them fit. In this case I feel that ‘suhi’ in the title works better than ‘sukiyaki.’ We could as well have had suhsi, but I did not even know what that was at the time and I am sure that I was in good company with the vast majority of my fellow Germans, all lacking this education and knowledge.

Now you might wonder what’s the point of all of this. After all I am the master of mudmee tie-dye now, so, how does JustZen’s wearable art fit into all this? Easy, if you go to the opera, don’t wear our clothes, but for everything else – you’ll be fine!

PS: Should you have any doubt that my story is true, you gotta watch this little slide show of vintage photos of our trip to Berlin. There are, unfortunately, no photos of our visit to the Japanese restaurant, but the pictures from the ice rink are just feet away. At that time the ‘Europa Center’ had this ice rink at the ground level and the Japanese restaurant was on the next level up. And who is yours truly? Did I mention that I had pretty long hair?