A while back a customer wrote us and thanked us for our beautiful clothes and how it helped her ease hard times she had fallen onto.

That made us realize how important it can be how we look at the world and how we can change our mind by changing how we present ourselves to the world.

You know the old grouch and how he looks – grey, hunched and with contempt for everything around him burned into the lines of his face. If you sometimes feell like that, what can you do to dig yourself out of that hole? 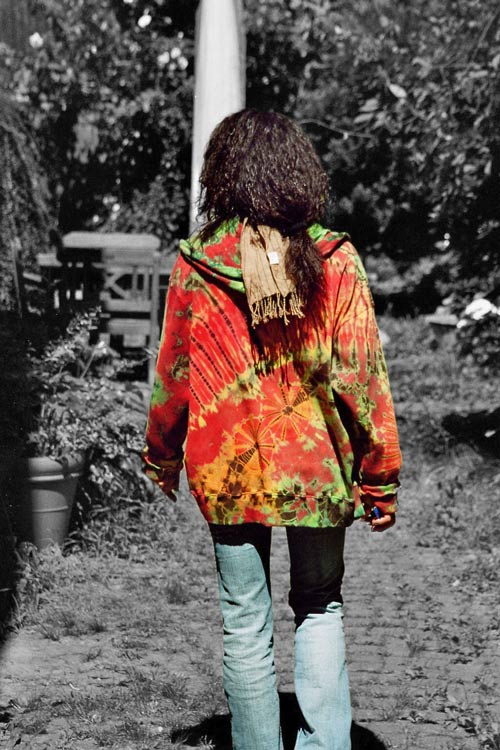 Color in a grey world

First thing would be to lift up your head and straighen your shoulders, then a look into the mirror and picture what you would want to see to make you feel better – or even good!

Getting rid of that grey would definitely be helpful, right? Even if it might feel wrong initially to wear something happy when you feel down, it does help!

The principle at work here is ‘fake it until you make it.’ You have to take just a little step out of your feeling down and handle the situation – a tiny, little bit – from the outside.

You can, so to speak, bootstrap yourself out of any negativity and into a feeling of …. YEAH!!

… drum roll … with some good news!

We finally managed to get some new items ready and will start adding them to the web site. The first of those are hoodies – just in time for the colder weather that we even notice in Southern California.

I want to try something new with this email and show you a few actual new jackets – with direct links to the item on our site, in case you are interested.

I am aware of the problem and want to point that out – you know that each item I show is a one-of-a-kind. That means that it might not be there any more when somebody else came by earlier and put it into his or her shopping cart. But not to dispair, there are more to chose from, these few are just a sample to wet your appetite.

Without any further ado… 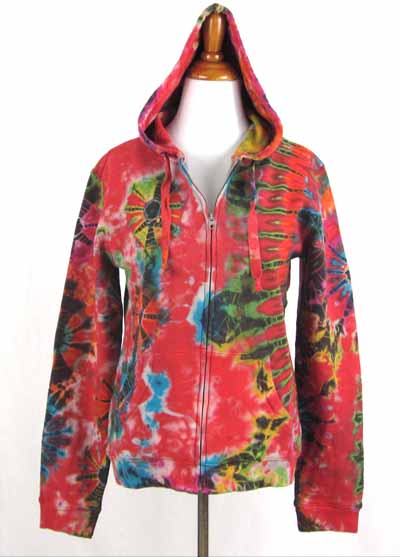 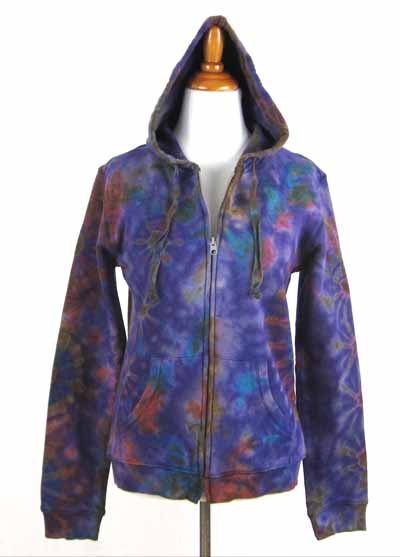 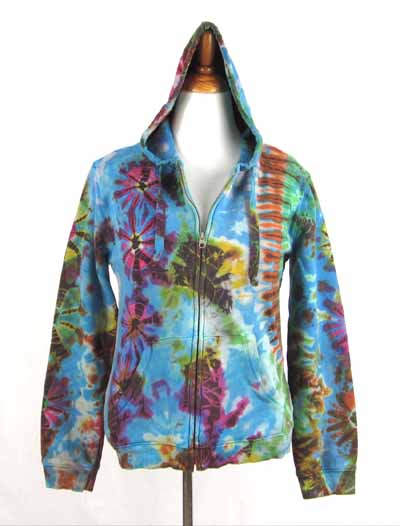 If none of those fits the bill you can look at All Our Hoodies, and then select the size you need from the selection box right there at the top of the screen. Then click ‘Search’ and we will show you all the hoodies in your size we have available.

And that’s all for today – be mighty!

Oh, yes… just not to be misunderstood – hoodies are getting all the attention because we added new ones – but there are my more – and different – things to be discovered – just start at the top…

(reprint of the newsletter send out the weekend after Easter 2011)

Happy Week after Easter – Merlin tuning in with nothing to say…

no, really! There are no announcements where Gigi is this weekend – still on her trip, no new items added to the site, no snow here at the JustZen Corporate headquarters…

But maybe I can tell about some great photos we already received from some of you for our customer gallery. Here is a really cool one that was taken when Andrea was stuck in a tent during a snow storm… Is this a cool picture, or What? Speaking of pictures – and  Andrea – you should check out her web site – she creates amazing animal portraits.

PS: A bit timid to tell you this but some of you might enjoy the story. Prompted by some scenes in the latest Doctor Who episode we watched today, I revisited an old flying story I had written many years ago. Today I re-published it on my private blog. It’s a bit long so don’t go there if you are in a rush – otherwise let me know what you think: I was there before Doctor Who.

Today we have a guest story from Jason B. from Austin, Texas:

Having grown up during the flower-power days, tie-dye had always had a fascination for me. This is the story on how I finally got my act together and got right into the adventure of tie-dye. Not only the adventure of finding the right shop to buy my next shirt, but experiencing the exhilaration of creating one of those great pieces of clothing myself.

It all started one lazy Sunday afternoon with nothing to do but either hanging out with some friends or watching some re-run show on TV. I had more or less decided on the former and got into my closet to put on another shirt when one of those darn tie-dye t-shirts caught my eye.

Something happened within me and I abandoned the idea that I had only two choices what to do with myself and decided right there that this will be a more interesting afternoon. I wanted to make my own tie-dye shirt!

I had once, in the past, half-heartedly attempted to get my mind around the techniques used to tie-dye and invested in some books. They must be still somewhere! Fortunately my apartment was not too big and did not have too many places where a few book can hide. It only took about 10 minutes until I had unearthed one of those books.

I more or less skipped over the first chapter, which gave a bit of history of dyeing in general, then going into the specifics of tying before dyeing. Then it got interesting, showing the different ways on how to tie a t-shirt to create the different patterns.

Not everything I needed was in the house so I had to rush out to get rubber bands, string and other assorted little things the book told me about. I opted not to try to find the dyes but order them on-line after I had my shirts all tied up.

There were decisions to be made if I should go with dyes that are applied in a cold solution or one that requires a warm bath, and I thought that I would need more time to study the pros and cons of the options some more. But what I did get was a dozen of plain white t-shirts. I went with the 100% cotton because I had learned that those would take the dyes best. I also  found, on sale, one nice sweat jacket that I hope I will be able to convert into one just like the ones offered at this site, having really nice and colorful tie-dye jackets, which has been a great inspiration for me.

Two hours later I was back at my place with everything I would need to get creative. And that I did. I took one t-shirt and folded horizontal pleats to – hopefully – end up with horizontal stripes and then I thought that I better also make one with vertical pleats because vertical stripes make you appear slimmer and that would probably be good for me.

Finally, when midnight was not that far away any more, I had to put things away as the lazy Sunday, which had turned out to be a rather productive Sunday, would be over soon and work was expecting me full of energy.

I ended up with five t-shirts with different methods of tying as the book had taught me. I have mentioned above the site with these hooded jackets, and I also looked at one of the tie-dye t-shirts they have, made with the same techniques, and I even tried tying to get something like this. Only when I will do the dyeing on of the next lazy Sundays will I know if I succeeded.

I’m proud of myself today that I turned a lazy Sunday into such a productive day and that’s why I thought I write this little article to remind me again later how much better a Sunday can be if it’s not lazy.